Annapolis: Fall of Goyim, Revival of Am Israel

The Honorable Holy Rebbe of Shomrei Emunim Admor spoke about the Annopolis Summit, the fall of the non-Jews, and the revival of Am Israel.

(The following intriguing article is only partially translated) 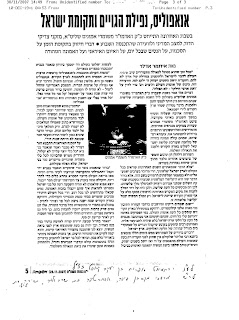 When non-Jews are feeling threatened by the Geula, they awaken to cause Am Israel pain by interfering in the land of Eretz Israel, a land that does not belong to them.

Am Israel is now in the stage of ikveta demeshicha (footsteps of Mashiach). Yishmaelim are preparing for the war in order to have control over the land (Israel) and thereby, trying to delay the final redemption, the Geula. Only Moshiach can wipe out the Klipa of the Yishmaelim.

The Holy Land is the only and main topic of the nations of the world even though there is plenty of unused land, free of inhabitants in the Middle East where Palestinians can live but they specifically want only the Holy Land.

All that is occuring now is are clear signs of Moshiach's arrival, as it is written in the sefer Tanna Devei Eliyahu. It says that there is no laughter for HKB'H till the nations of the world gather to fight HaShem, and only then והקב"ה יושב בשמים ישחק וילעג למו And HKB'H in Shamayim 'laughs' at them".

The RaMaK, zs'l, writes that before the Geula, nations of the world will gather in pretense of making 'peace' and HaShem will cause them to fight between one another, as it says, "וסכסכתי במצרים במצרים".

The Annapolis Summit gathered the nations of the world, together with the Erev Rav and Yishmaelim to discuss how to divide the land of Israel. The Annaplis Summit 'peace talks' will collapse, and will cause the collapse of the Unites States. The American currency is plummeting and know that it will not revive.

It says in Chazal that when the earth quaked and swollowed Korach and his men, his 2 sons did Teshuva and were miracously lifted in the air. This is what will happen before Moshiach arrives, the earth of Eretz Israel will quake and open her mouth but the people that will do Teshuva and have faith in HKB'H, they too will be miracously elevated in the air and no harm will come to them.

It is worthwhile that every Jew should observe the vicissitudes of the universe and study the holy words of Chazal and our prophets and strengthen in Emunah (faith). This will quicken the coming of Moshiach and the complete redemption.