In the beginning, people inside the Bet Medrash thought that it was a bothersome and annoying pigeon, the kind that appears sometimes when the window is open. They tried making her fly away, but she would not budge. Without fear, the white dove grasped tightly the lectern edge. One would think[+/-] show/hide text
that it was the Bet Medrash's precious bird.

After many various attempts to remove her, one of the Talmidim (students) held her by the wings and physically removed her outside and set her free. Surprisingly, the dove returned and stood on the lectern like nothing ever happened.

People outside the Bet Midrash heard the commotion and entered to see this wonder. Again, she was grabbed by the wings and released outside. Again, she returned to the same position, same location, like waiting for the Rav.

This kept going on 6 times and always, the white dove returned, to the same place. 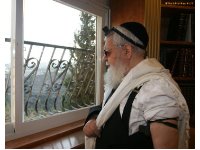 During the day, HaRav Ovadia Yosef heard about the white dove and a few minutes before Mincha, went to the Bet Medrash, to his usual sitting place and held the dove with both hands, with tenderness. The Rav stroked her lovingly, looked directly at her and said "Dove, what do you ponder and what about do you wonder? ...he sent the dove out again, but she did not come back to him. You have completed your mission, go in peace. Amen, let it be HaShem's will."

And then in the view of all present, as soon as the words left the Rav's mouth, they dove flew away and did not return.

Afterwards, HaRav Ovadia Shlita said to a close family relative that this dove is a neshama of a Tzaddik, searching his tikun.

The first 2 sentences the Rav said are from Rabbi Yehudah HaNassi's poem and it is referring to Am Israel who are compared to a dove. The last 2 sentences are from Noach, when he sent the dove from the ark.