The Torah not only predicts the catastrophic terror attacks of Sept. 11, 2001, but does so with great specificity, including the number of buildings toppled and the exact date, according to a new book; "Prophecies for the Era of Muslim Terror: A Torah Perspective on World Events," Rabbi Menachem Kohen reveals where and how Scriptures make this uncanny prediction. 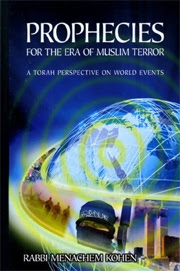 He also chronicles how the Torah predicted a severe 1,800-year drought in the land of Israel during the dispersion of the Jews from A.D. 70 until just before their return in the 20th century – a period with so little rain that no other people would be able to inhabit the country.

For the Era of Muslim Terror, a Torah Perspective on World Events: *The Attack on the Twin Towers (date & number of buildings)
*The unrelenting efforts to dismantle Jewish Israel
*The invasions of Afganistan & Iraq by Coalition forces
*Saddam Hussein's fall from power and its year
*Operation Desert Storm (the code-name & combatants)

"People need to understand current events," he writes. "People need to know how to respond to events during this frightening period of time, and Torah provides the instructions. I thought by discussing such information, I might be able to lift people's spirits, because Torah truths can help people comprehend current events and become less anxious and less frightened." View sample page