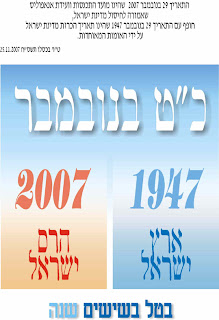 On November 29, 1947, the nations of the world gathered in the UN and declared establishment of the state of Israel.

November 29, 2007, the nations of the world gather in Annapolis to discuss resolution to destroy the state of Israel.

Chazon Ish, zs'l: "Moshiach will not take over from them (zionists), something will happen in the interim. One clear day they will open the windows and they will see 'no more State'."